In September, for a while
I will ride a crocodile
Down the chicken soup-y Nile
Paddle once, paddle twice
Paddle chicken soup with rice 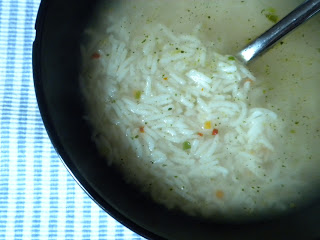 The past three days have been gorgeous, sunny and warm....and today...when I am not working...pouring with rain! I know I said I love autumn...but c'mon! Well, I suppose the rain gives me the perfect excuse to do some baking (like I need an excuse!).

For the past couple of months BBC has been airing their reality baking show The Great British Bake-Off culminating in the finale this past Tuesday. For the last challenge the finalists had to create afternoon tea for a tea party held at Fulham Palace.  Well...I just LOVE afternoon tea....and even more...I LOVE SCONES!

I am not sure if it was the influence of Tuesday's episode or just my need to bake that created a huge craving in my belly for scones this morning.  Walking through Marks and Spencers I had to steer myself away from the prepackaged scones and hurried myself home to bake bake bake!

Scones are something you can always throw together.  You don't need soft butter....you don't need much of anything really...just one egg...some milk and flour, sugar and baking powder.  Today I was craving something savoury so opted to toss in a few tablespoons of parmesean cheese and a handful of cheddar cheese.  Yum yum yum! 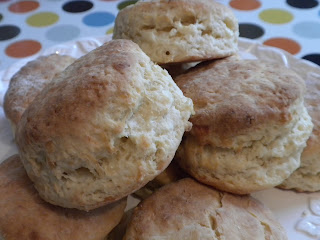 Butter Tarts...yearning for a Canadian fall

It is that time of year again...the last few lingering days of summer sun struggling to heat up the day and the almost in-your-face wall of cold that comes earlier and earlier each night.  Cool crisp mornings, sweaters and jeans, and mittens at night...my kind of day! I love love love this transition period between summer and fall...infact I have been secretly counting down the days.  I know I know I know...I live in England, surely every summer day is like this...but...believe it or not....it isn't.  This past summer we've had a pretty good spat of hot days and not too much rain...but I've just been waiting and waiting for now!!

Oh so many lovely treats come with the arrival of fall...corn on the cob, acron squash, slow cooked stews, chocolate pecan pie...and the best best best bit....BUTTER TARTS! Here in the UK butter tarts just don't exist.  I mean...of course they don't...they are quintessentially Canadian...which means if I want one I gotta make em!

I like to think that butter tart recipes are closely guarded family treasures.  Back in Toronto I used to volunteer with a group of older women who told me that everyone's recipe is different, PLUS there was also the debate over runny vs. thicker filling, raisens vs. pecans, depth of the pastry....so many things to consider.

Well...I'll admit I don't have an old family recipe, but I am determined to introduce my version (borrowed from The New Canadian Basics cookbook) as a staple here in my UK world.  I've not made these tarts since moving in with David and so....there was a slight overflow of filling...mostly because I wasn't sure how deep the tart shells would be when I made them in my muffin tins (I need to invest in some loosebased tart shell tins), but the taste and texture were totally heavenly!!! 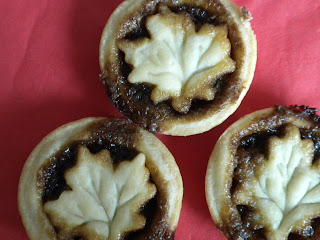 So Friday was back to reality...my parents had gone home...no more free meals...no more treats...no more excuses...so off to the library I trotted with my huge bag of books to return and came home with new inspiration in the form of Valentine Warner and the Abel & Cole cookbook (and a fresh veggie box waiting)

Still being in vacation mode (or at least in I don't want to go back to the real world mode) I haven't been able to really get stuck into cooking new and exciting things, but on Saturday (craving chinese food) I adapted a soba, cabbage and peanut stir fry recipe from the Abel & Cole book (not having soba or peanuts) and was most impressed with the results. 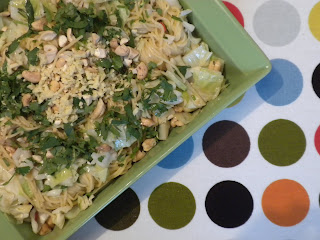 Cabbage is used in asian cooking...and I love it, but I don't think that I have ever really thought about using it as an MAIN ingredient in a stir fry. This dish is basically...cabbage...but a pointed cabbage, which has softer leaves and a milder flavour than bog standard white cabbages.  The recipe calls for soba noodles, which are nice...but not something I regularily have in my cupboard and are...expensive. Instead I used dried eggnoodles...easy to prepare, cheap and worked really well I think.  Basically what you do is stir fry thinly sliced garlic...like 4 cloves...(I added some fresh red chili) and 1/2 a cabbage that has been chopped into squares about an inch wide, then I added about a handful of chopped cashews and a handful of corriander the noodles (already cooked) and the sauce-2 tsp caster sugar, 1 glug of groundnut oil, 1/4 cup rice wine vinegar and 2 glug soy sauce all mixed together, toss the noodles and cabbage to coat in sauce and wait until it bubbles and thickens...and finally serve with more chopped corriander, cashews, soy sauce and lime.  Yum yum yum!
Posted by Victoria at 11:33 2 comments:

Cromer Crab and chillin with the 'rents

My parents have been visiting for the last few weeks and I am ashamed to say that I can count the number of times I actually cooked on one hand! How embarassing!!  But hey...if their paying....I'm eating!! so you can't really blame me...

My mum and I had a delicious lunch at the Ottolenghi by Angel in London...sadly the pictures are on her camera, but it was a great great great experience.  She had lamb koftas with two salads and I had pan fried salmon with avocado salas and two salads, and I made her share the lemon polenta cake for dessert....I've yet to try to make the cakes at home (he hasn't published the recipe anywhere so I'm gonna wing it) but they are on the list.  Other meals enjoyed included a massive plate of fish n chips at Geos in Clacton-on-Sea...The fish was crispy, comfortingly greasy without being messy and oh so HUGE! We had to trample a few seniors to get a table...no we didn't, we waited in line patiently but I was prepared to use my handbag if needed! And then we hit the road up to the North Norfolk Coast where we feasted on Cromer Crabs... 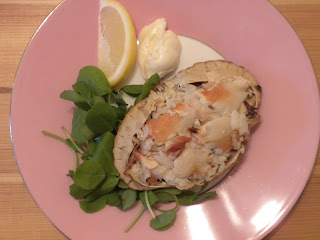 This was part of a home "cooked" meal...cept we bought them already prepared, or "dressed" as they say here.  Now that I think of it, this was our starter...dressed Cromer Crab on peashoot salad...followed by...oh this is so funny...cornish pasties bought from the bakery beside the crab shack!! One less meal I actually cooked!! oh dear...
Posted by Victoria at 11:14 1 comment: 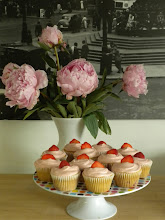 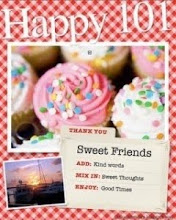